When a nurse from the Tees valley and her fiancé realised that there was a gap in the market within her community, they quickly launched their new venture and haven’t looked back since.

Michelle Sobande and her fiancé Sean McAvoy were inspired to open their own launderette and café after her long, tedious evenings were spent watching her sons washing go round the machine in her local launderette with nothing to entertain her. There were no refreshments while she waited or anywhere close enough to go, that’s when Michelle came up with the idea of combining the two, and opening Odd Socks. 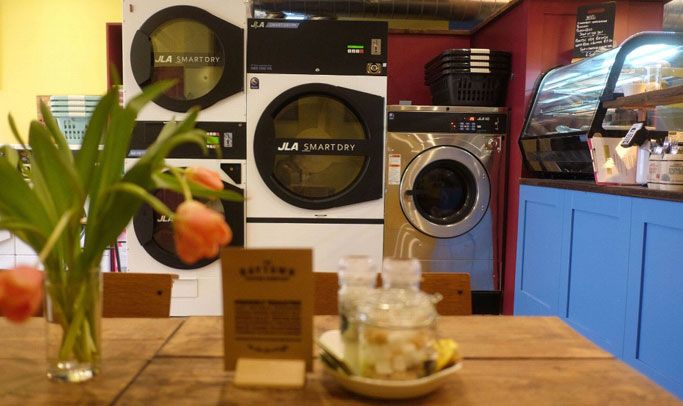 Michelle approached JLA at the very early stages of her idea and was visited by Richard, the JLA laundry expert in her area. “Richard was really helpful, we had no idea about the machines and we just bombarded him with phone calls and emails to make sure we knew everything we needed to know. He was invaluable.”

Michelle was advised that she needed good quality washing machines with industrial durability to handle the level of daily usage, as well as being easy for customers to use and efficient for Michelle to run. As a result, JLA provided Odd Socks with three JLA SMART Washers and three JLA SMART dryers which are robust machines equipped with JLA’s unique intelligent technology to deliver maximum wash quality while also operating at optimum efficiency.

Michelle said “Even the customers have commented on how effective and quiet the machines are and have been extremely impressed when their clothes are often dried within 15 minutes. They used to have to dry their clothes two or three times before they were ready.”

Michelle is already seeing signs of success 10 weeks after opening: “It’s going really well - we had to stay open until 8pm the other night and it looks like it’s going to be the same again tonight. We have even had customers coming here from other launderettes because of the reliability of the machines and the relaxed atmosphere of the café.”

Michelle who runs the business with her fiancé Sean, plans to establish Odd Socks as a community hub that caters to groups from around the local area, providing them with a comfortable venue to meet as well as providing a useful service.

Michelle was really impressed with everyone at JLA “The installation was really professional and I would definitely recommend JLA to anyone else setting up a launderette.”

JLA has a useful guide available for anyone thinking of starting their own laundrette business here:

How to open a successful launderette business

help us uncover our JLA All-stars

JLA Tops the League Tables for the Oratory Schools Association

Why Now is The Perfect Time to Upgrade Your Boiler

Welcome to the All-New JLA.com!

JLA and The Tea Cosy Café
JLA at CIH Scotland 2016

JLA at the NHF Care and Support Exhibition 2015

domestic bliss if youre a working business
jla takes the headache away for the talbot hotelk
JLA Video Testimonial from The Talbot Hotel, Malton

Free School Meals - Are You Ready for the Rush?
Escape the Red Tape of Yellow Waste Bag Disposal

Choosing the right dishwasher for your business

CQC warnings on the rise...could you be next?
Hotel checks in with JLA for laundry cost savings

A Pioneering Company in the Best of Health
dishwasher care home

Care Leading the way in laundry design and planni